Clubman Dab-On Nick Relief is a product that rivals the Clubman Styptic Pencil. Both products share one common goal. They are formulated to stop the bleeding that often occurs with wet shaving. Many men have experienced the inconvenience of small nicks and cuts that appear on their faces no matter how slowly and carefully they shave. Clubman Dab-On Nick Relief is one alternative to hastily applied bits of toilet paper placed all over one’s face. 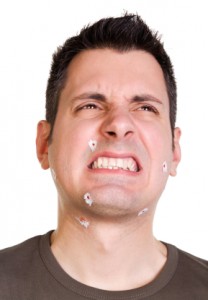 Clubman Dab-On Nick Relief differs from its predecessor, the styptic pencil, in several different ways. One of the most dramatic ways in which it differs is the lack of a stinging sensation when applied. The astringent used in these products tends to cause a mildly painful or uncomfortable sensation in many users. Clubman Dab-On Nick Relief claims that it does not produce that effect. However, some users have reported that they do feel a minor stinging sensation with this liquid that is similar to the feeling experienced by users of styptic pencils. It seems that user experience may vary from person to person. Like the pencil, this product is also formulated to speed healing and moisturize the skin. But unlike the pencil, the user doesn’t have to worry about possible breakage or melting.

There are many benefits to using Clubman Dab-On Nick Relief, not the least of which is that it really works to stop the bleeding quickly. There are several minor drawbacks to the product, but they can be minimized or eliminated entirely through proper use and handling. Some users report that it may leave a visible, chalky white residue as it dries, but the residue is less noticeable than the residue from the styptic pencil. Fortunately, this residue can be easily removed or rinsed once the product has dried without restarting the bleeding. The product is applied directly to the skin using an integrated sponge attached to the top of the vial of liquid. That means blood can seep onto the sponge and potentially contaminate the product. Rinsing the sponge tip thoroughly under running water after each use is the best way to deal with this. It is also best for each member of the household to own his own tube of Clubman Dab-On Nick Relief rather than sharing. Overall, users have reported that the product is well worth the modest cost making this an affordable option for any man who wants to stop minor bleeding quickly after shaving.