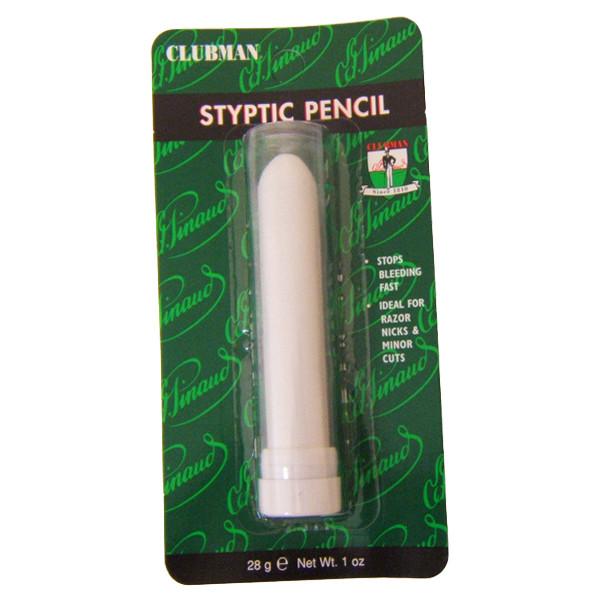 The Clubman Styptic Pencil is one gentlemen’s shaving product that performs exactly as described. This small white stick in the distinctive green package contains alum, which is an astringent. This ingredient safely and effectively stops the bleeding associated with the nicks and cuts sometimes caused by shaving. The pencil is stored dry. The user moistens the tip slightly before pressing it against the skin at the site of the cut. It only takes one small application to constrict blood vessels at the site of the bleeding. The pencil leaves behind a light layer of white residue that seals the cut and protects it from becoming infected. Pinaud, the company behind the Clubman name, has a history that dates back to 1810 when it was created by a Parisian named Edouard Pinaud.

Users are talking about the Clubman Styptic Pencil, and the reviews are overwhelmingly positive. People agree that the product does exactly what it promises. It stops the bleeding associated with wet shaving, and it stops it fast. Reviewers also say that the product is less expensive in stores than it is online. Unfortunately, it is rare to find it in stores. That makes the convenience of ordering it online more important than any potential cost savings of buying it at a brick and mortar store. Satisfied consumers also report that one Clubman Styptic Pencil lasts a very long time. Some people have even used the same pencil for several years. That makes it an excellent value overall, even when factoring in the slightly higher price of buying it on the Internet.

Some users caution that the product stings when applied and has a tendency to dissolve if put away wet. To prevent excessive melting and help the product last longer, it is best to moisten the tip sparingly before use and dry it before storing it. For sanitary reasons, the pencil also needs to be rinsed after use. Using less water during the process is better for the longevity of the product. In addition, the pencil is brittle and breaks easily. Fortunately, it works just as well even if it is broken so consumers will still be able to use the entire styptic pencil and get their money’s worth. Best of all, the product works well without the inconvenience and undesirable appearance related to sticking small scraps of toilet paper on every cut, a dubious method used by many men who have never heard of the Clubman Styptic Pencil.