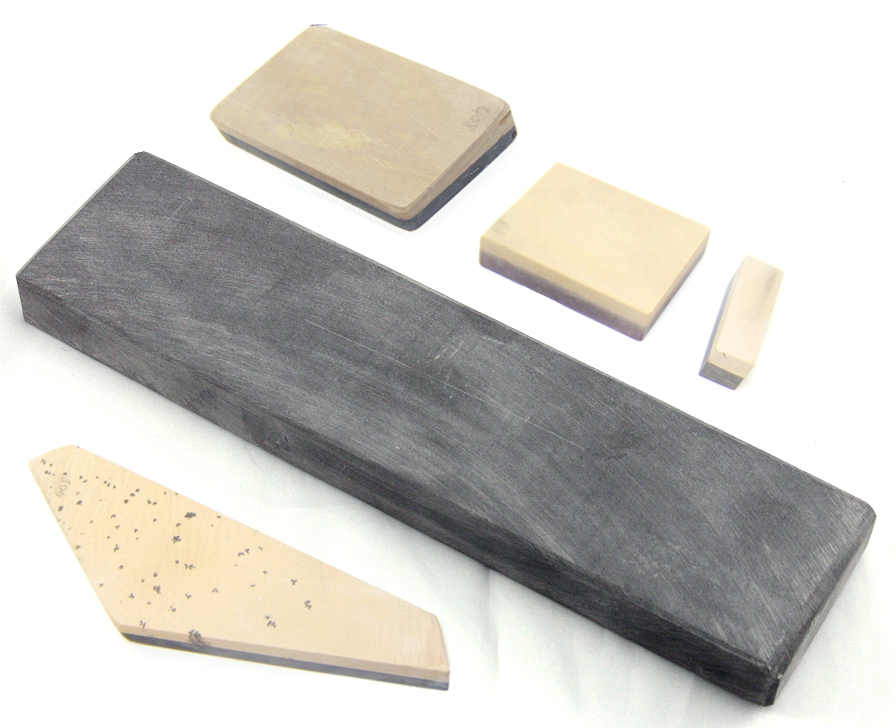 There are two basic types of hones, natural hones and artificial hones, however, they both serve the same purpose, to sharpen straight razors in between uses. In addition, there are many different variations within the two main categories of hones. Hones are also commonly known as sharpening stones.
Some common natural hones are Belgian Yellow Coticule or Belgian Blue Coticule. The names of these hones accurately reflect what they are, both in origin and in substance. These stones are mined from Belgium and they come in both yellow and blue varieties. The name coticule comes from the Latin word coticula, which means whetstone. These natural hones, or coticules, come in several different sizes. The physical beauty of these natural hones is that no two look exactly the same due to naturally occurring variations in their appearance.

Belgian Blue Coticules have a normal grit of 4000. Belgian Yellow Coticules have a normal grit of 8000 without a slurry or 6000 when used with a slurry; they come with a slurry stone. Both stones are often used in conjunction, with the blue stone used first and the yellow stone used last. Because these are natural stones, there may be some variation in the grit. Speaking of stones, a lapping stone is recommended to round the long edges of the natural hone before use. Using a lapping stone to prepare the hone helps prevent denting the straight razor blade during sharpening. Sandpaper can be used as an alternative to a lapping stone. These natural stones sharpen a straight razor’s edge to provide a smooth, clean shave. Belgian Yellow Coticules are less plentiful than Belgian Blue Coticules. Unfortunately, these stones are likely to become more scarce as time goes on; they are currently being mined from only one quarry in Belgium.

In addition to the Belgian Coticules, there are several other types of natural hones. Escher German Stones and Japanese natural stones are even less common than the stones that are mined in Belgium. Escher German Stones came from a quarry that is largely no longer accessible. Most of the quarry where these stones were mined is now a protected nature reserve. Therefore, the number of remaining stones available to the public is extremely limited, and their shapes and sizes are dictated by the veins in the stone. However, it is still possible to obtain vintage stones from resellers. Japanese natural stones were mined from several quarries in Japan. Unfortunately, the most prominent of these quarries has been closed since 1967. These Japanese stones are categorized into two main groups, Higashi Mono and Nishimono, which mean eastern things and western things, respectively. The eastern stones are generally finishing stones with finer grits, while the western stones are coarser. Like the other natural hones, supplies are limited, but purchasing vintage stones may be an option.