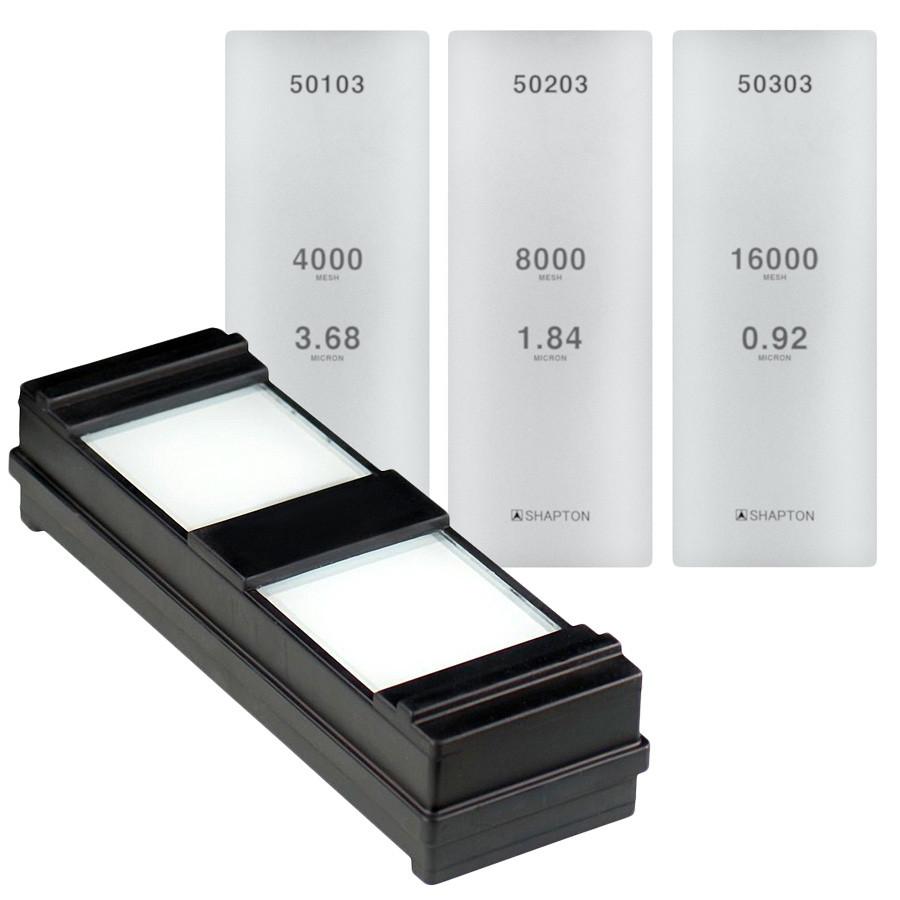 DMT Dia-Sharp Diamond Sharpeners and Bench Stones
DMT stands for Diamond Machining Technology. DMT Dia-Sharp Diamond Sharpeners are ideal for straight razor users because they require no maintenance. Users do not soak, oil or lap these precision-made diamond plate hones. The surface of these hones remains consistent throughout years of use thanks to sturdy construction and materials. There are several different types of hones by DMT. The DMT Dia-Sharp Bench Stone is available as a coarse hone that comes in two sizes. This coarse hone can be used as a lapping plate for natural hones such as the Belgian Yellow Coticule, Belgian Blue Coticule, German Escher Stones and natural Japanese Waterstones. This coarse hone is recommended only for lapping; it is not suitable for sharpening. The DMT Dia-Sharp Bench Stone is also available in extra fine and extra extra fine grits. Unlike the coarse diamond plate hones, these two finer grits are used to sharpen straight razors. The extra fine grit is perfect for the first phase of honing. It removes light corrosion, dents and small chips from the blade. The extra extra fine grit is used for the final phase. This hone completes the process of polishing and maintaining a straight razor.

Naniwa Waterstone Hones
Naniwa Waterstone Hones are produced in Osaka. They are considered superior to other artificial hones when it comes to refining the edge of a straight razor blade. Unlike the diamond plate hones made by DMT, the hones made by Naniwa do require lapping. The DMT Dia-Sharp Coarse Bench Stones are ideal for this task. Since Naniwa Waterstone Hones require lapping, they are not as low maintenance as the DMT hones. However, they are similar to the DMT hones in that they do not need to be soaked before use. Splashing water on Naniwa Waterstone Hones before use is sufficient. Naniwa Combo Waterstone Hones are two hones in one. They feature 3000 grit on one side and 8000 grit on the other. Naniwa also offers hones with 3000, 8000 or 12000 grit; each comes with a convenient plastic stand. The three different grits are made to be used in tandem. The 3000 grit is perfect for the first stage of honing. The 8000 grit is used for the second phase. The 12000 grit is used for fine polishing and finishing.

Norton Waterstones and Norton Combination Waterstones
Norton Waterstones are made in the United States, and they are among the best-known artificial stones. They do need to be soaked before use, with the exception of the 8000 grit, which may be splashed with water instead. Norton offers a variety of different stones including single grit and dual grit waterstones. Norton Waterstones are available in four different grits: 220, 1000, 4000 and 8000. These waterstones measure 8″ x 3″ x 1″, which makes them considerably larger in surface area than the 6″ stones. As with other stones, the higher grit stones are used for finishing while the lower grit stones are used for the first phases of honing. Norton Combination Waterstones take all of the great qualities consumers get from the single grit stones and combine them with the convenience of having two different grits on one solitary stone. The combination stones are available in four different combos: 220/1000, 1000/4000, 1000/8000 and 4000/8000. For straight razor users, the combination 4000/8000 grit is considered the most suitable. The 4000 grit creates a fine edge while the 8000 grit allows that edge to be polished to a mirror-like finish. Norton sells all these stones with a convenient multifunctional case that stores and protects each stone. The case also features non-skid rubber feet to help keep the stone immobile during use. Norton Waterstones are a very quick and effective tool for sharpening straight razors, but they are soft and need to be flattened periodically. That’s why Norton also manufactures a flattening stone that can be used to maintain the flat surface of their artificial waterstones.