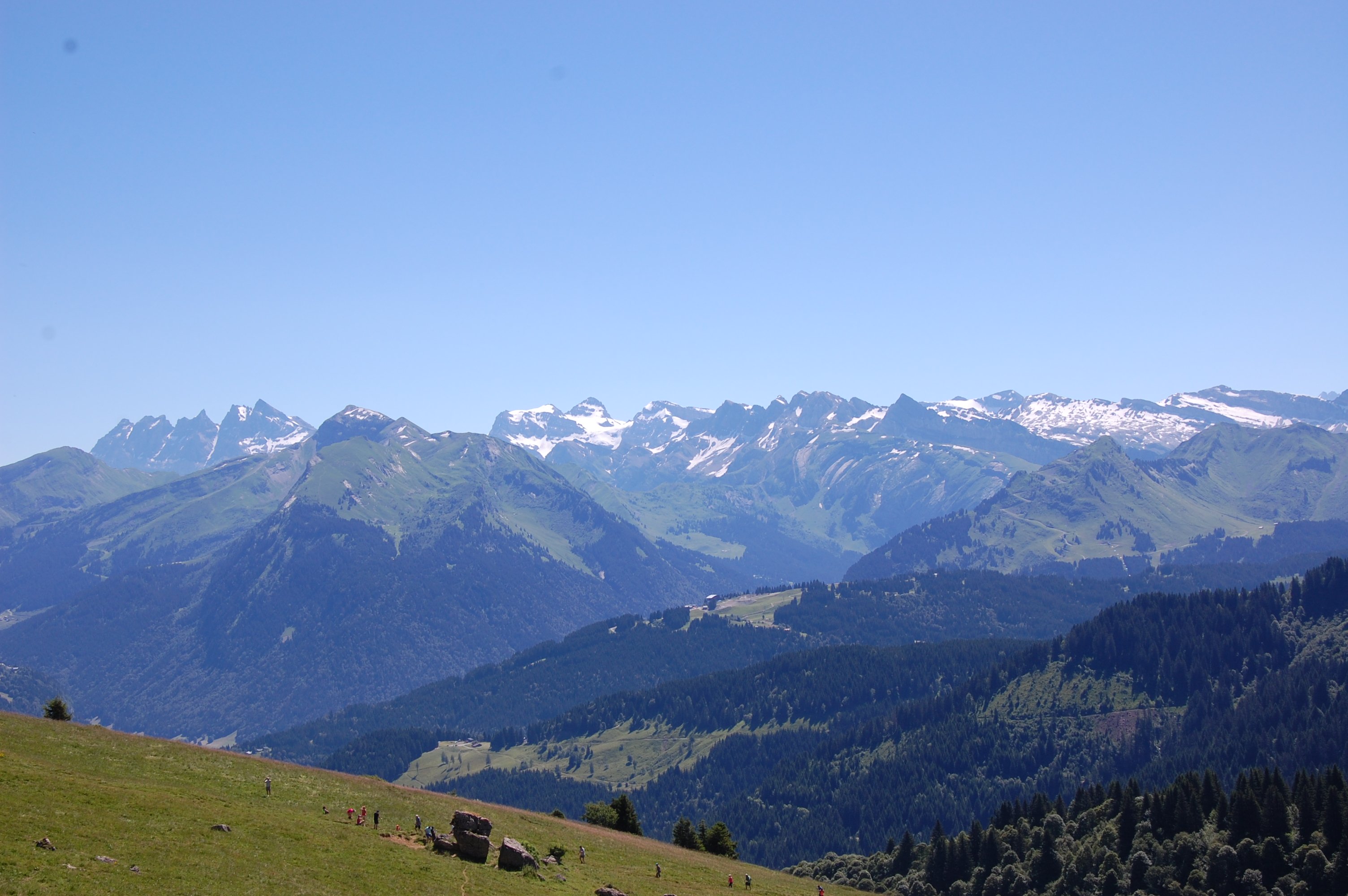 Having never travelled to continental Europe before, I’d collected a series of impressions most scraped from those around me. With family in England, I’d often been there. Perched on the edge of the continent, the English watch their European cousins with what seems like bemusement and a mild contempt.

And while that’s not surprising as it seems to be how the English perceive most countries in the world, it isn’t exactly the beaming positivity one wants to bring on one’s first trip to that great, historic continent. Thriving homeland of Western Civilization, birthplace of Christianity, stomping ground of Julius Caesar, Shakespeare, and the inventor of the biscuit. Even before it began, this trip held such promise as to excite even a stalwartly, politely subdued Canadian.

The goal of the trip was simple, and Mission Impossible it was not. Land in Geneva and admire watches and oddly-shaped chocolates. Hop and skip over to France for a jaunt, experience a baguette or two (along with that wonderful language of love), and then take the train through the Alps to Austria. In each country, the esteemed writer made beforehand the necessary preparations for his mind to be blown with such culture and fashion as is rarely seen in the New World.

Switzerland is exactly what one expects of a country run by the Swiss. Many before have compared comfortable, clean Toronto to New York if run by the Swiss, but in truth that’s a poor comparison. Without timely trains and severely lacking in giant lake fountains, Toronto is a pale shadow of this mountain jewel. On arrival, the wayward Canadian immediately sought comfort and refugee in the familiar: A Starbucks.

In truth, the plan was to meet a friend at “the Starbucks in Geneva.” Unfortunately, (and expectedly), Geneva is actually home to more than one Starbucks, so although said friend was never found, ridiculously expensive tea proved easier to acquire. 5 minutes later, and 5€ poorer, our heroic author set out again in search of adventure, and an opportunity appeared almost immediately in the form of Geneva’s shopping district. Finally! A place where wearing a Swatch is actually appropriate!

Eventually, hunger beckoned and a thought occurred: what could be nicer than a comfortable, relaxed Swiss meal on a patio overlooking the lake? I wasn’t sure what Swiss food was (in my mind it was some combination of bread, cheese, and jam. I’m still not sure if that’s wrong.)

A quick and scary jaunt through the intimidating streets of mean Geneva eventually revealed a little café. Actually chosen due to its proximity to the car, which we had parked illegally as we were sorely lacking in Swiss Franc coins, and also reasoned that we probably couldn’t be arrested in a foreign country.

So, with one dutiful eye on our rented Peugeot (how delightfully foreign! How totally unpronounceable!) we entered the café. And, the reader should know, by this time it had been about 12 hours since anything other than steamed and thus delightfully limp airplane chicken was imbibed. At this point even jam on cheese – normally a specialty meal at best – sounded enticing.

The more experienced traveller is no doubt rolling their eyes at this news. What a tired, old stereotype! The Swiss are more than the sum of their cheese-and-jam-eating ways! But alas, this café served almost only those two items, along with a tray of tiny hamburgers and some sugar candy. The server (who was a lot more eager to visit Toronto than we nervous travelers were to leave it) informed us that the cheese-and-jams were all-you-can-eat. Delightful! 40€ a person. Not so delightful!

Instead, we elected to go à la carte (side note: this moment in the narrative is also the point at which the author became aware that the Swiss do not use, or understand, the phrase à la carte). In retrospect, Switzerland lived up to almost all of our expectations, as we left its noble borders both poor and hungry.

(As an aside, the author would also like to note that Switzerland possesses some truly magnificent tunnels. Long, well-lit, and clean enough to eat off of. Those are some tunnels you can take home to your mother.)

Onward! The journey continued to the wonderful nation of France. As a Canadian, France is not unfamiliar to us, having founded the eastern regions of our country. However, it quickly became apparent that things here were profoundly different.

Actually, the author should explain first that this did not become immediately apparent, as exactly 6 minutes after leaving the Geneva central core, the author’s car GPS unit died (on its own) and didn’t resuscitate (also on its own), for a solid 45 minutes. This left us with little to do but curse the Swiss and admire the beauty of their lake. It truly is magnificent. However, as the air conditioning, radio, and electric windows had all, also, died, true and genuine appreciation was mostly a pipe dream for us. Nevertheless, sweating and uncomfortable in Switzerland is just as noble and beautiful a travel experience as anything else. We truly were growing as human beings.

Eventually on the road again, France petered into view. Petered is an interesting verb, used here to mean frustratingly slowly on account of totally uncalled-for French traffic in the middle of the day. Perhaps the French would use a different word.

It turns out the French/Swiss border is totally unguarded. Perhaps the great Swiss reputation for neutrality relies on stern words more than it does on the pointy sticks and colourful outfits the Swiss use when they’re hanging out with the Pope. This was all somewhat disappointing, as we had been looking forward to a good, old-fashioned, American-style pat-down and interrogation.

The goal in the French alps was to investigate some hilly terrain, and hilly terrain there was indeed. Our destination was the resort village of Morzine, internationally known for its winter skiing and summer mountain biking. Our goal was to do neither, but instead to get fat on crepes and French wine. Exercise seemed a poor companion to these high hopes.

The city website of Morzine informed us that the town was, “the ideal place for your family,” but lacking families of our own, the second logo proved far more exciting: “Intense, unique… and real!” It was the exclamation point that proved particularly titillating.

We only had a few days to enjoy French hospitality, as the Tour de France was scheduled to make an appearance on Saturday and a medieval legal statute required all residents at that time to be on a cocktail of steroids none of us could afford. Therefore, we were committed to getting the most out of our time there while we could.

My first priority was to drink some wine. My second priority was to meet a lovely, French girl. Luckily, the bar seemed like a good place to make both dreams come true, so a meander seemed in order. Unfortunately, it was at this point that our first great disappointment was had: Morzine is populated almost entirely by drunken Englishman, a ridiculous stereotype that included even the bartenders. Zut alors! If we wanted to experience English culture, we could have stayed in Upper Canada! All those hours spent practising French, for nothing.

Disheartened, we sought comfort in our third priority: a delicious French meal. Unfortunately, that also was not to be, as every single restaurant in town appeared to be an Italian pizzeria. We were informed that things were designed this way so as to appeal as maximally as possible to the English, who apparently cannot buy pizza back on their native, rainy island.

It was with this bitter taste in our mouths that we departed France. Magnificent land of Charles the Hammer, its green pastures, dazzling cities, and ancient culture now but a distant memory. For now, our sights were set on a higher plane: Vienna, and the 12-hour train ride it would take us to get there.

Fendrihan Travel Blog. Author: Nicholas Burton-Vulovic. All photos by author. Want us to feature your trip? Send us an email to info@fendrihan.com