Some people believe that all the good stuff has already been invented. I don’t believe that is true. There is plenty of room for new ideas and inventions. However, there are some things that don’t need to be reinvented. One of these things is the wheel. Another is the razor. Now, someone just needs to break the news to Gillette before they try to patent the wheel.

Gillette not only tried to invent the multi-bladed razor, but they managed to convince the general public that they had succeeded. Never mind that an Italian company had already invented a razor with five blades more than a century earlier. Gillette wants people to think that they invented the close shave, but men have been seeking a closer shave for millenia while Gillette has only been trademarked since the early 20th century. They certainly have managed to create the illusion that they created shaving, but the earliest known examples of shaving tools actually date back tens of thousands of years. It’s hard to believe, but it’s true. 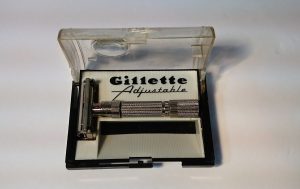 How about the vibrating razor? Surely that was a modern invention by Gillette, right? Wrong. Actually, a product by the name of Stahly Live Blade Razor was produced seven decades ago. Although I can’t imagine using a vibrating razor produced in 1946, Gillette was surely standing on the shoulders of giants when they came up with their post-modern version. Stahly even had a women’s version of the Live Blade Razor in pink.

So, where will Gillette find its next big inspiration? Perhaps they will find it in the slant-bar safety razor of yesteryear or the open-comb classic razor. These are both impressive products that are still in use today for good reason. They provide impressive control and a clean, close shave. I just hope Gillette won’t pretend to invent them.

Has everything good already been invented? We won’t know until the next big thing comes along. However, when it comes to razors, it seems there is truly nothing new under the sun.